I made it out of the bitter Chicago weather only to be greeted by slightly less bitter weather in Nashville.  “It was fine before you got here,” I was told on several occasions and my decision to not bring a thick winter jacket with me seemed like a bad one! To join the show in Nashville was something of a dream for me.  Not only did I get to perform in a beautiful theatre with some good friends but I have so many other friends in Nashville, it meant that they could come out to see me perform and I could hang out with them.

We had a pretty heavy work load for the first few days, although not as heavy as I thought, much to my dismay, when I was sitting at a cafe at 10am on Monday morning trying to kick my hangover from my first night in town before my 12 pm rehearsal, only to find out it was 12 pm then next day.  Needless to say, I returned to bed for a while. I had to learn this new show as there are a few differences to what I have been doing recently, but the cast and crew were very helpful and accommodating, often having to grab me in the dark as I came off stage fumbling for my next change or cue.  It was helpful to have our direction team in town as well.  We got to work on the show not just from a technical point of view but jumped right in to making it our own and getting some solid character work done as well. Andrew Jackson Hall in TPAC, the Tennessee performing Art Centre is one of the largest houses I have played in a while and the backstage area is sprawling and labyrinthine in its layout.  On more than one occasion myself and the other company members found ourselves in our own Spinal Tap ‘Hello Cleveland’ moment, going through doors expecting to see the stage only to enter onto the loading dock or appear by stage door!

No trip to Nashville is complete for me without a trip to Robert’s on Broadway, the only Honky Tonk worth going to.  The bands there only play traditional Country Music and serve PBR.  A killer combination in my opinion.  It was the first place I took all the guys when we got into town on Monday evening and was joined by my friend Amber, my ambassador of everything cool to do in Nashville.  We then hit up the 5 Spot and ‘Motown Monday’. I have been to Motown Monday a few times before and knew that we were in for a treat.  I got a kick out of hearing quite a many songs which were either written by or featured my friend Steve Cropper knowing that he and his family were coming to see me perform later in the week. 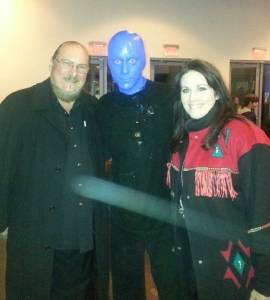 I was introduced to the Croppers by another good friend of mine in London, Graham Webb, and from the first time I met them a few years ago I have been made to feel like part of the family every time I am in town.  Steve, Angel, Andrea and Cameron all came to see Blue Man on Thursday and by all accounts had a great time. What really topped off the week for me was being able to see Steve play as well.  It turns out that he was 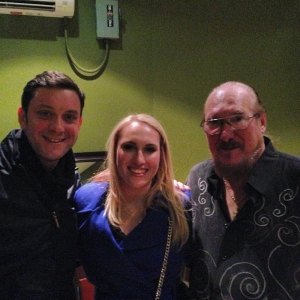 playing a show in Nashville when I had a night off.  I joined Angel, Andrea and Angel’s lovely mother to see him play a bunch of songs which I grew up listening to.  Angel joined him on stage for a surprise couple of numbers as well.  I was made to feel so welcome and got to hear some great music as well. 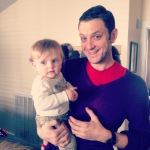 Despite all the great music I saw during my time in Nashville, the highlight of my trip has to have been meeting Master Thomas Royal Minelli, the newest addition to my circle of Nashvillian friends.  Mark and Emily’s son is a welcome addition to our gang and I enjoyed getting to know him.  I look forward to seeing him again soon.   We left after the show on Sunday evening.  I got to take my first ride on the tour bus.  Sleeping on the bus was surprisingly similar to sleeping on the ship.  I am in the top bunk so it moves around a bit.  The movement of the ocean has always helped me sleep so I should be fine out here! Next stop, Warren, Ohio