I have learned over the years that when you get the call from Ed Gregory, you say yes!  Diving with sharks, death rides through Bangkok and chartering small planes in Mexico are just a few of the countless adventures we have had over the years.  So when he asked me to go to Texas with him to shoot a music festival for the weekend, he had barely finished the sentence before I told him I was in.

JMBLYA is a 2 day music festival which takes place in Dallas and Austin in front of 10’s of thousands of people with some of the biggest names in Rap, and EDM.  The In Color Studios team,  Ed, Kevin and myself, were tasked with capturing all the action on stage for the IMAG screens at the side of the stage.

It was probably not a good idea to be playing blackjack at the $1 dollar table in Hooters Casino in Vegas until 4am the night before our 8am flight, but who needs sleep right?  Anyway, we made the flight on time slept for pretty much the entire journey, being woken up by the people next to us trying to get off once we had landed. 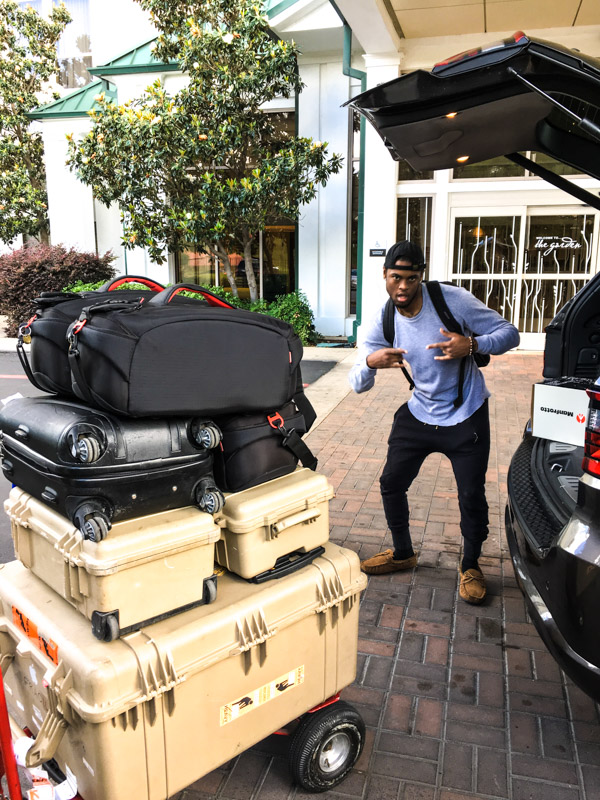 I have to say, I have never driven in a city as confusing yet as beautiful as Dallas.  The highway system is laid out like a bowl of spaghetti as it winds it was through some of the most striking architecture I have seen in while.  The giant glass skyscrapers form a dramatic welcome to the city as they reflect the sun and at time, almost blend with the sky behind them.

Having tested all the cameras and feeds the day before, our load in on the morning of the concert was pretty simple and before we knew it, we were under way.  I think I had underestimated the scale of the production and the amount of people who would attend.  The location in Dallas, at the State Fair Ground was huge and people just kept piling in. 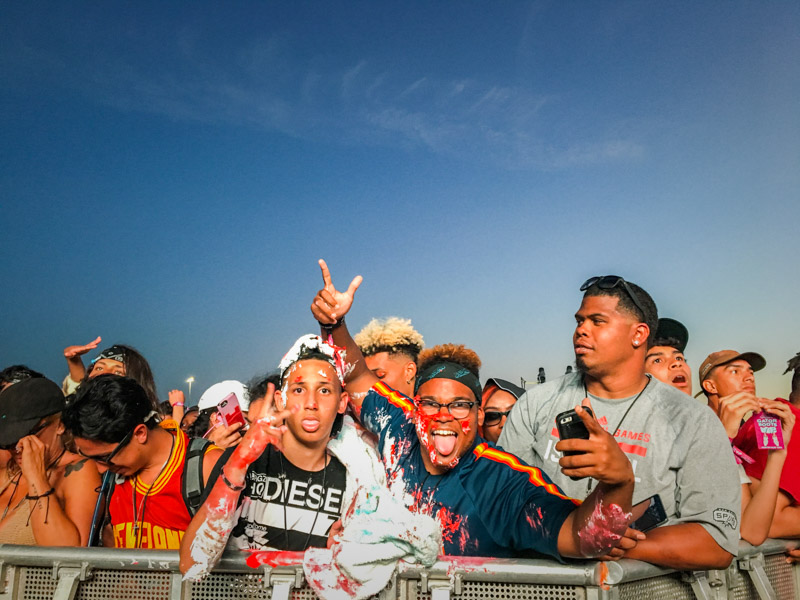 Another thing we underestimated was the heat.  There was now escape from the sun for Kevin and I at the front of the stage and Ed, mixing and shooting from the front of house area was fully exposed.  Needless to say there were parts of us we missed with the sunscreen and we were burnt!  I had forgotten to put any on my hands despite the fact that they were fully exposed and operating the camera so a trip to the hardware store on the morning of the second day was necessary to buy some gloves!

I was astounded by the commitment of the people who came to see these acts.  Those that made it down the front to see the show from just behind my position at the edge of the stage were out in the sun, standing up with 50, 000 pushing behind them for pretty much 10 hours.  Despite the security personnel handing out cases and cases of water all day, there were still kids being pulled out left and right after being overcome by the heat and passing out. 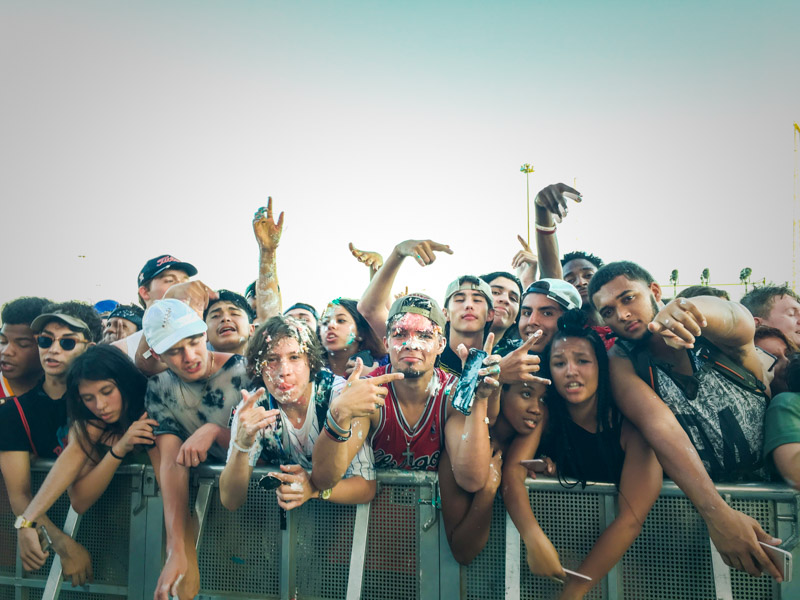 I have to say, I was not familiar with most of the acts before I arrived at the festival but there were some that I loved.  I think my favourite was the DJ Steve Aoki.  His EDM set got the entire crowd going wild and his trademark ‘cake throw’ was not a disappointment! I was in a prime position to see him launch his sponge missiles are the expectant crowd.  On the second day, in Ausin, the sun was setting behind him as he came to the edge of the stage to greet his adoring fans like some superhuman conductor controlling his orchestra of crazy teenagers!

The second day of the festival was hard work.  We had driven over night from Dallas to Austin and after having got very little sleep we had to setup and do it all again.  This time the sun was even more brutal. Whereas in Dallas the previous day, the sun slipped behind some buildings next to the stage around 4 or 5 o’clock, today there was no escape.  We were exposed until sunset. 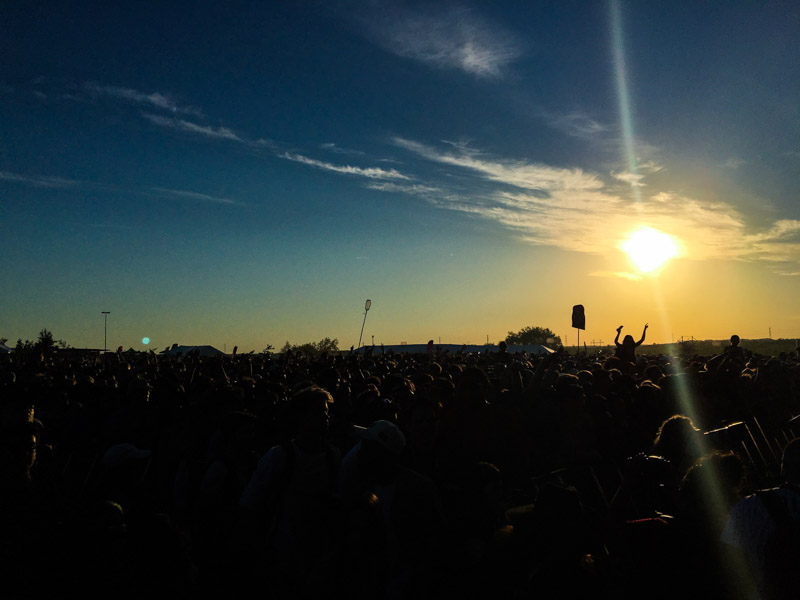 I think we must have consumed our own body weight in water to keep us hydrated and had long sleeve shirts and bandannas draped over our necks to protect us.  By the time the sun had disappeared past the horizon we were relieved of duty but the video team from the final act so we were able to stand at the back and enjoy the climax of the whole weekend when Chance the Rapper performed.

Chance had injured his leg before his set the day before so was not as lively as he normally is.  However, he made a great recovery the next day and his set was awesome.  His band, the sound, the lights and the confetti cannons were on point and brought the whole weekend to triumphant close.

All that was left for us to do was to pack up and completely crash at the hotel!

We made the uneventful drive back to Austin in good time, checked in and went our separate ways; Ed and Kevin back to Vegas, me to Nashville.  It was somewhat of a surprise for me to arrive home and find that Ed and I had inadvertently switched our identical equipment cases and mine had ended up in Vegas with him and vice-versa…cue some hasty phone calls and a quick trip to the post office the next morning and that was taken care of.

But, I mean, it would not have been a true Dan and Ed adventure had there not been some kind of situation to deal with along the way