I arrived in Charters Towers at about 5.30 pm last friday after a couple of hours on a bus from Townsville.  I found Genine near the bus stop with her son, the awesome (and talkative!) Mack and his knew nanny/governess, Jo.  Robert, Genine’s husband appeared shortly afterwards.  They had been in town that day buying groceries as well as collecting me.  I thought that I get a lot of shopping when i buy food but this was something else.  I suppose that when you live nearly 2 hours away from the nearest town you have to have everything covered and I never complain at a large amount of food.

On the way, we chatted and they told me that their property was around 76,000 acres and they had between 3,000 and 4,000 head of cattle.  Apparently this is small compared to some places!

After unloading the groceries I was shown to my quarters at the back of the house.  I have a room in a portable building that they call a donga!  I set my alarm for 5.30 but needn’t have bothered as the cockerel woke me up at 3!

I have been lending a hand around the property where ever possible.  I like to keep busy and I kind of feel guilty if I am sitting down when Robert is working so I keep asking for things to do.  I have enjoyed getting to know the family. Rob has a great sense of humour and never tires of ribbing me!  Aaron helps out on the farm permanently and has been great at showing me the ropes.  I am getting on well with five year old Mack.  This is not surprising really as we have the same sense of humour and both love Transformers!  He has enjoyed seeing me play my guitar and has even joined in on his harmonica!

I dont think it is possible to work on a farm without, some point, picking up shit.  This, in fact was one of my first jobs.  5 cart loads! 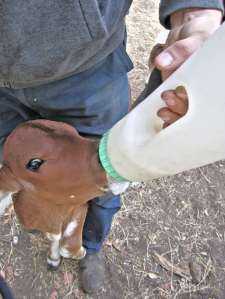 One of my favourite things to do is to help feed the calves or the poddies at they are called.  Wally and Woody are both young calves that were abandoned by their mother.  They were luckier that the other calf that Jo found the other day that did not make it.

I have been out for a ride as well. I rode snappy.  We went for a short ride around the horse paddock.  I am hoping to do some more of this!

Today I helped Genine stack the hay in the shed.  Not as easy as it sounds.  These bales are pretty big and it doesn’t help when there is a cow in the way that refueses to move.  We managed to start the job off with Maggie (the cow) there but she kept getting stuck so we decided to move her.  I dragged her by the ears and Genine had her by the tail and we managed to get her to within inches of the gate when she bolted.  I had to round her up on the quad bike and we eventually (with a bit more pushing and shoving) managed to get her out of the way!

As you can see I had the situation under control!!!

I even got to drive the tractor

Right, that was just a quick check in.  I have done tons of other stuff such as shooting guns, swimming in waterholes under a water fall, riding quad bikes but internet is precious out here and i don’t want to take up all the time!